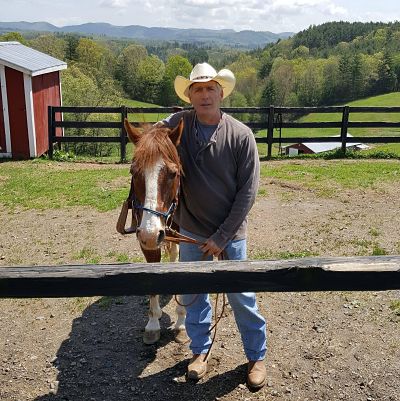 His name is Sam; and he was called up to the High Country after word got out that a local bunch of outlaws were planning to rob one of the Blue Ridge Mountains' historic narrow-gauge steam locomotives.

Quick both on his feet and in the saddle, Sam and his trusty steed are here to thwart those plans and ensure your safety as you journey through the Wild West.

Sam, played by Ashe Memorial Hospital emergency department nurse Robert Powers, will make his Wild West Train Adventure debut April 2 when Tweetsie Railroad reopens for the season. Tweetsie will continue to operate on an abbreviated weekend schedule in April and May before opening daily for the summer months.

"I just thought Tweetsie would be fun and just a hoot," Powers says. "You're in character the whole time that you are there, so I think it'll be fun to see the kids enjoy the show and play a part in their happiness. It's nice to be able to provide entertainment and something else to think about besides COVID all the time."

As the historic steam-powered locomotive makes its three-mile trek through the North Carolina Mountains, riders will enjoy an action-packed adventure. In his role, Powers will play a U.S. marshal who will ride onto the scene and play a part in the storyline during one two stops along the train's path.

This year will mark the first year that Powers has played a role in the show. He auditioned and participated in a horse tryout last year and was hired to participate before COVID-19 forced Tweetsie Railroad to close prior to the start of the 2020 season.

In the weekends leading up to his first performance, Powers has been rehearsing and working with the horses, which has proven challenging at times since the horses have spent the past year grazing rather than working.
Luckily, Powers knows how to handle himself in critical situations.

As an emergency room nurse, Powers knows there's always the potential for life and death situations, and in those emergent situations, you need to know what's going on. The same can be said when you're on top of a horse. One minute everything could be going according to plan and the next minute you could be sliding across the grass with a horse on top of you.

"It's not good for a horse's behavior to not work for that long because they tend to do what they want to do," Powers says. "The first time you mess with them, you may have to let them understand what their job is but these are good horses."

Powers' love for horses stems from his passion for Western art. Powers enjoys recreating the Old West in his paintings, focusing on historic Western wear and old time Western characters and their horses. Powers participates in a lot of art shows out west, as well as the Best of the Blue Ridge, and in doing so, his interest in horses and the time period has only intensified as he's gotten older. This summer, Powers will be featured in the Painters of Ashe County book.

In his spare time, Powers enjoys riding his horse Jed, a buckskin quarter horse, which boards at Burnthill Stables in Laurel Springs.

"It's fun for me," Powers says. "We're definitely spoiled. The arena trails are right there, so all I have to do is pull up and throw a saddle on him. It's nice to have that ability in Ashe."

While Powers is just now breaking into the entertainment sector, his career in the healthcare industry began years ago while working as a paramedic. He also spent time working with the United States Department of Homeland Security and volunteering for Samaritan's Purse's field hospitals in earthquake and hurricane ravaged areas such as Haiti and Iraq. Powers even wrote a textbook titled "International Disaster Nursing" in 2010.

In 2014, Powers moved to Ashe County from Raleigh and joined the Ashe Memorial Hospital team as a part-time nurse in the emergency department.

"I enjoy being a nurse here," Powers says. "I like Ashe County and the sense of community. You feel like you're taking care of your neighbors. It gives a different meaning to it. We also have a good group of down-to-earth people that we work with, which really makes a difference."