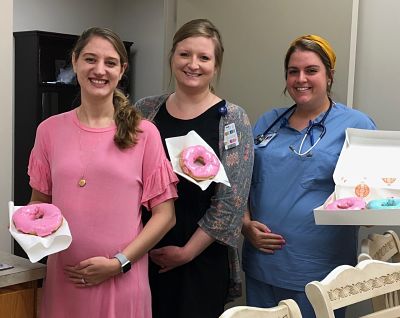 Picture of Mount Jefferson Family Medicine colleagues Jessica Null, Kinsey Jones, and Katie Miller holding their pregnant bellies and doughnuts in another hand. They were all pregnant with boys at the same time.


Family is at the heart of all that Mount Jefferson Family Medicine represents.

The clinic is committed to providing full-spectrum care for the entire family, and that begins close to home.

Every day is an opportunity for the team to come together, build close-knit relationships and share in all of life's milestones.

And this couldn't have been more apparent than over the past year as three Mount Jefferson Family Medicine team members navigated pregnancies and welcomed baby boys at the same time.

Yes, you read that correctly.

It was a monumental start to the New Year for Mount Jefferson Family Medicine; and for Katie, Jessica and Kinsey, it couldn't have been scripted any better.

"I will say I appreciate all of my coworkers and love where I work because of them and our patients," says Kinsey. "I didn't have an easy pregnancy, but there wasn't a day that went by that my coworkers didn't heck on me and my son. I'd have to say at Mount Jefferson Family Medicine my coworkers are more like family!"

Katie and Jessica had discussed wanting to start families, but it wasn't until the two friends were in a provider meeting that they announced they would be navigating their journey to motherhood together.

Kinsey and the rest of the team were thrilled to learn that the Mount Jefferson Family Medicine family would soon be growing. At the time, Kinsey, who has a 4-year-old son as well, and her husband were not planning on having another child. Katie had a different idea. She kept telling Kinsey she would be next and sure enough a few weeks later Kinsey announced she was also expecting.

"I was honestly shocked to say the least, but very excited," says Katie. "They say things always typically happen in 3's and this was no different."

"It was shocking," adds Jessica. "It was definitely a surprise when it was announced we were all pregnant and due around the same time. It was so incredible to have so much good news for all of us to share."

Over the next five months, Katie, Jessica and Kinsey leaned on another through all the highs and lows of pregnancy. They were each other's biggest advocates, cheerleaders and sources of support as they shared their pregnancy journeys.

As their due dates approached, Dr. Melinda Wonsick and their Mount Jefferson Family Medicine work family threw a socially distant baby shower for all three of them to enjoy together. It was a memorable moment for Katie, Jessica and Kinsey who enjoyed talking with one another about their pregnancies and checking in with one another to see how they were doing.

"It was so special to me to share this journey with my work family," says Jessica. "My Mount Jefferson Family Medicine family has been so supportive and thoughtful throughout my pregnancy and post-partum. My family lives several hours away, so the support I received at work truly meant the world to me."

For Katie and Kinsey the notion of celebrating their pregnancies with their work family continued right up until the day their sons were born with Dr. Wonsick and Dr. Burgher both helping to deliver Katie's twins and Dr. Wonsick delivering Kinsey's son.

In the weeks since their sons were born, Katie, Jessica and Kinsey have been enjoying their maternity leave and soaking up every minute with their precious little ones. Katie and Kinsey will return to Mount Jefferson Family Medicine in March with Jessica scheduled to follow in April.

While their pregnancy journeys may be over, their journeys as boy moms are only just beginning.

"It means so much that we will all be able to have kids the same age to grow up with," says Katie.