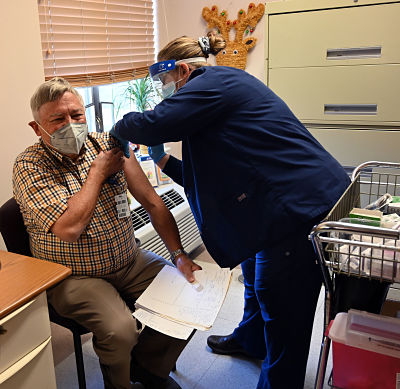 After more than seven years as a hospitalist for Ashe Memorial Hospital, Dr. Owen Oksanen is searching for his next mountain to climb

After more than seven years as a hospitalist for Ashe Memorial Hospital, Dr. Owen Oksanen is searching for his next mountain to climb


The emergency room can often be a whirlwind of activity as physicians and nurses busily admit and treat patients in need; but for Dr. Owen Oksanen a walk through Ashe Memorial Hospital's emergency room yielded a glimpse at what it really means to be part of a close-knit community.

Dr. Oksanen recalls seeing patients lined up to be seen, as it was particularly busy in the emergency department that day, but that wasn't what stood it out to him at the time. Rather, it was watching patients and visitors assisting one another and asking the nursing staff what they could do to help ease the process for them.

It may sound like a work of fiction, but in that moment Dr. Oksanen realized that's simply Ashe County.

"You don't see that anywhere else -- just how nice people are," says Dr. Oksanen. "Ashe County has a very family oriented feel. More people say 'Thank You' and appreciate what you're doing more than anywhere else I've been."

That's just one of the countless memories of his time at Ashe Memorial Hospital that stands out. After more than seven years, Dr. Oksanen is saying farewell to the hospitalist program after retiring at the end of January.

"Dr. Oksanen was instrumental in helping build our hospitalist program, and we are grateful to him for his years of service," says Brian Yates, chief executive officer for Ashe Memorial Hospital. "He will always be a part of our AMH family, and we wish him well in his retirement."

Medicine has always been at the forefront for Dr. Oksanen, who was five years old when he began carrying around a doctor's bag. Over the span of his 43-year medical career, Dr. Oksanen has been fortunate to care for those in need alongside colleagues who are just as passionate about the work that they do.

A native of Massachusetts, Dr. Oksanen earned his medical degree from the University of Rochester School of Medicine, in Rochester, N.Y., before completing a family practice residency at UVA Medical Center, in Charlottesville, Va., in 1978.

Through his residency, Dr. Oksanen was able to split his time between internal medicine and family medicine, which allowed him the opportunity to treat a wide variety of patients with varying conditions.

"The hospital that I was working for before jokingly said that Ashe Memorial Hospital would need to rent me for a while before they would give me up," says Dr. Oksanen.

Dr. Oksanen was part of the first set of hospitalists that came through Ashe Memorial, helping to deliver patient-centered, high quality care. Since then, Dr. Oksanen has watched the hospital continue to grow and expand its service offerings. However, while he often thinks that he's younger than he is, Dr. Oksanen admits that the strain of the weeklong program has caught up to him. He may no longer have the stamina for a 168-hour work week, but his desire to help people remains just as strong.

"I've always enjoyed taking an undetermined prognoses and getting to a solution that helps people," says Dr. Oksanen. "To see a patient come in sick and to have a hand in treating them, to me that's very satisfying."

Dr. Oksanen is now searching for his next mountain to climb. Upon retirement, the avid climber plans to spend time exploring the different mountains and trails throughout the High Country and its surrounding areas, including Grandfather Mountain and Stone Mountain State Park.

He and his wife Barbara also hope to eventually get back to their cottage in Ireland where they typically spend a third of the year and enjoying hiking through the Irish countryside.

"Medicine's the only thing that I really planned to do, and I'm thankful that I'm lucky enough to have been able to do that," says Dr. Oksanen. "I think the people at the hospital have been very nice to me, and I appreciate everything that they have done for me. I'm sorry I got too old."