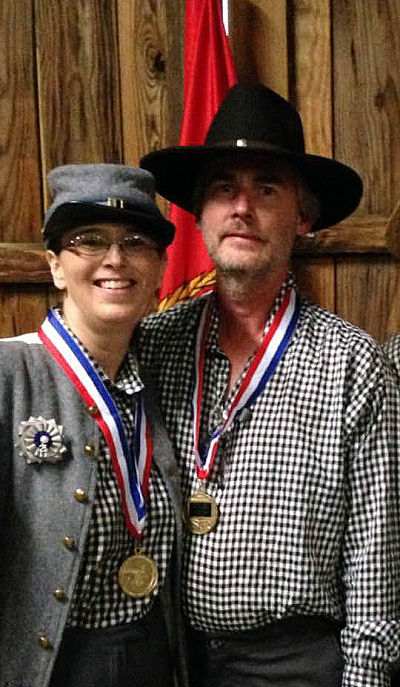 
The lines have been drawn.

Fifty yards is all that stands between Cathy Martin and her intended target - a wooden fence post lined with dangling ceramic tiles and clay pigeons.

Cathy approaches her mark, adjusts her grey forage cap and lifts her carbine rifle into position.

With the seconds quickly ticking off the timer, Cathy fires a shot sending orange sparks, billows of black powder and ceramic shards into the air. Time is of the essence as she and her Iredell Blues teammates attempt to break all of their targets, faster than their opponents, before the timer sounds.

As the smoke begins to clear, Cathy and her teammates congratulate one another on another gold medal winning performance.

The Iredell Blues, based in Statesville, are part of the North-South Skirmish Association, which was created in 1950 to commemorate the heroism of the men who fought in the American Civil War while encouraging the preservation of battlefields, artifacts, clothing and education of the time period. Those involved in the organization safely participate in the competitive shooting of Civil War firearms and artillery while wearing Civil War uniforms. The organization is currently home to more than 3,500 members spread across more than 200 units.

With a love of guns and shooting as a sport, Cathy's husband, Marty, tried on more than one occasion to get his wife interested in modern guns, but it just wasn't for her.

It wasn't until a friend introduced him to shooting black powder - using guns from the Civil War Era with a team in Statesville - that it captured Cathy's attention.

"I went to his first competition, and I was intrigued," Cathy says. "It looked like a lot of fun shooting at breakable targets instead of just paper ones."

One of the Iredell Blues team members took Cathy under his wing, introducing her to everyone and showing her the ropes. While she didn't set out to spend her weekends traveling back in time, it didn't take long before she was hooked.

Cathy's husband bought her a black powder pistol that Christmas and she soon joined the team. Since then, Cathy has added a musket and a carbine rifle to competitive shooting artillery.

"The fellowship between the team he had joined and the other teams made you feel like part of a big family," Cathy says. "I thoroughly enjoy competing with my husband and other team members both male and female."

During rifle competition, teams of five attempt to shoot hanging tiles, clay pigeons and other breakable objects from a distances of 25, 50 and 100 yards. The teams compete against one another at the same time with each round being a timed event. During the round, each team attempts to shoot and break all of their targets before the timer sounds. Medals are awarded to the first, second and third-place teams. Other categories include musket, carbine, revolvers and cannons.

In addition to using Civil War era weapons, Cathy and her team members also dress in the uniform worn by the unit or division they represent - in this case the Iredell Blues, representing the 4th Regiment of the North Carolina Infantry.

Cathy will take a break from competition for the summer before hopefully returning to the battlefield this fall.

When she's not busy working and competing, Cathy enjoys gardening, scrapbooking, traveling and spending time with her husband of 29 years and their 13-year-old lab/greyhound Abbee.