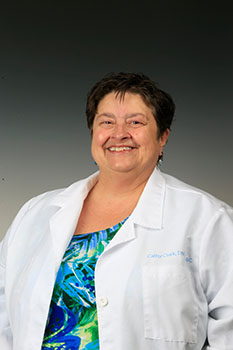 
Cathy Clark didn't realize the value of community until she turned to those around her.

There, in the faces of friends and neighbors both young and old, she discovered she was right where she was meant to be. We take comfort in familiarity, and for the Mount Jefferson Family Medicine and Ashe Oncology and Hematology family nurse practitioner, the ability to put herself in the shoes of her patients has allowed her to provide them with the best possible care.

"Whenever people tell you 'I'm so glad that you're here for me,' it makes me realize fate happens in a weird way," Cathy says. "I would not be as good of a doctor as I am a nurse practitioner. It made me think in a different kind of way."

A native of Ashe County, Cathy grew up in Lansing dreaming of having her photographs splashed across the glossy pages of National Geographic. But fate had other ideas. While working for the Alleghany News, Cathy learned about an opportunity at Alleghany Memorial Hospital. Shortly thereafter, she joined the hospital staff working as a registration clerk in the emergency room and later doing data processing for accounts receivable.

It wasn't until she was working for Alleghany Memorial Hospital that Cathy decided to go back to school - something she had always wanted to do. Cathy earned her bachelor's degree in biology from Appalachian State University in 1992, becoming the first person in her family to graduate from college.

She took a year off after graduating and worked as an office manager in a doctor's office before ultimately deciding to go to nursing school. She then went on to Surry Community College where she received an associate's degree in applied sciences in nursing in 1994. Cathy spent time working as an emergency room nurse at Alleghany Memorial Hospital, Watauga Medical Center and Ashe Memorial Hospital.

"I've always done things on a whim when it comes to nursing," Cathy says.

While working as a nurse manager for the Appalachian District Health Department, Cathy earned her bachelor's degree in nursing from the University of North Carolina at Charlotte in 2004.

After completing her master's program, Cathy joined the team at Mount Jefferson Family Medicine where she provides primary care services to patients of all ages.

Three years ago, following a breast cancer diagnosis and successful treatment of her own, Cathy began seeing patients at Ashe Oncology and Hematology as well. Through her own experience, Cathy has been able to connect with her patients and resonate with their emotions.

"It's really hard when people have chemotherapy," Cathy says. "I understood what people were going through. A lot of people don't go back to work. It affects the patient, but also the family, co-workers, everybody. What I realized working with the people here and the people that had cancer was that they needed someone who understood.

"It's really interesting to analyze what you do," Cathy adds. "I got to live again."