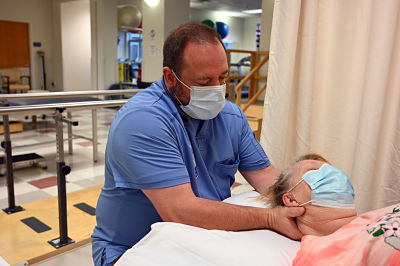 Picture of Physical Therapist Assistant, Bill Coggin. He has a female patient lying on her back. He is standing behind her with his hands under the back of her neck.


In order to move forward, we often need to look to where we've been.

Our past experiences and the paths we take ultimately shape who we will become; but in times of adversity, sometimes all it takes is hearing one's ability to overcome similar circumstances to reshape our approach.

Ashe Memorial Hospital Rehabilitation Services physical therapy assistant Bill Coggin hopes to be that sounding board for his patients.

"I like being able to relate to what my patients are going through and help them through those times," Bill says. "I try to share with them what to expect and help them understand that if they continue to stay positive and get the rest that they need, then they'll gradually get better."

Bill's ability to connect with his patients on a personal level isn't something he learned from a physical therapy textbook. Rather it stems from undergoing 13 surgeries and three years of physical therapy following a roadside bombing incident in 2005.

But the U.S. Army veteran's story of perseverance began years before that tragic day when he went to live in an orphanage at 9 years old. In order to keep busy, Bill tried his hand at all of the sports before eventually settling on soccer and baseball. In addition to learning the importance of sportsmanship, Bill also learned the value of hard work while working on the orphanage's farm and in its print shop when he wasn't in school.

"It made me more independent and appreciative of every little thing," Bill says of the experience.

Bill's dedication and commitment landed him a soccer scholarship to Campbell University as a defender, but a knee injury ended his career prematurely. Following his recovery, Bill went on to punt for Fayetteville State University before ultimately deciding to join the Army in 1989. The son of a retired paratrooper, Bill opted to follow suit.

"I didn't have the self-disciple and motivation that I needed to continue school at the time, so I decided to join the Army," Bill says. "I figured if I was going to do it there needed to be some amount of adrenaline rush and jumping out of planes checked that box off. I enjoyed the team dynamic and that you're working to better everyone else, but there's also the sense that everyone always has your back. A couple years turned into 20."

Following the events of 9/11, Bill was deployed to Afghanistan before deploying to Iraq in 2003 and again in 2005. Bill was only six months into his second tour in Iraq when disaster struck. Bill was in the passenger seat of a military vehicle when he was injured by a roadside bomb. The blast left Bill with a blown eye socket, crushed trachea, ruptured colon, broken leg and dislocated shoulder, among other injuries.

"That was the beginning of the end for me," Bill says.

Bill was medically evacuated to Kuwait before returning stateside to undergo multiple extensive surgeries and years of physical therapy.

"I could see the progress," Bill says. "It was a long process. There were times when I was tired of it all, and I was tired of being in pain for a long time. I think it helps to know where someone is to be able to help them out of it. I try to do that with my patients and share my thoughts and my story because I've been through a lot just like them, and I know where they are coming from."

Since joining the team at Ashe Memorial Hospital, Bill has been committed to helping his patients fight through adversity on the way to overcoming their injuries and ailments. Bill works alongside each of Ashe Memorial Hospital's physical therapists to ensure each patient is receiving the best possible plan of care.

When he's not busy helping his patients, Bill enjoys spending time with his wife, Doris, and children Danielle, Samantha, Travis, who is in the Army, and Taylor. He also enjoys biking, hiking and exploring new places on vacation.